TeamWalking is owned and operated by Mark Reid, an acclaimed outdoor writer, experienced Mountain Leader & Fellow of the Royal Geographical Society. Mark loves the outdoors and wants to share his passion with you. When you book with TeamWalking you are not just booking Mark to take you on a walk, you are booking over 25 years of professional outdoor experience!

Mark Reid is a member of the following organisations:

Mark is the author of 17 books, including the acclaimed ‘Inn Way’ series with books covering all of the National Parks of Northern England. Three of his books have been awarded the ‘travel book of the week’ in The Sunday Times, Mail on Sunday and The Guardian.

In 1997 Mark gave up a successful career as an area manager with a large brewery to pursue his dream of writing his ‘Inn Way’ books. Since 1997, Mark has walked over 25,000 miles of footpaths across the hills and mountains of Northern England and knows this area like the back of his hand – the history, geology, folklore, fauna, flora and the best pubs – and will share this knowledge and experience with you.

Since 2007, Mark has taken out over 13,500 people walking in the hills and mountains – in all weathers and with all ages and abilities; it’s all about the steps you take, not the distance you walk.

Mark has been featured on ITV Yorkshire’s ‘A Breath of Fresh Air’ TV walks series, with weatherman Jon Mitchell’, for a number of years.

HERE’S A LITTLE MORE ABOUT MARK

What inspired you to get into the outdoors?
A school trip to Swaledale when I was 16 years old – it changed my life!

What did you do before you were an outdoor instructor?
I was an area manager with a large brewery

Who is your outdoor hero?
It has to be James Herriot – the 80s TV series inspired me to discover the Yorkshire Dales

What is your most memorable outdoor moment?
Taking my son and daughter on their first proper mountain walk to the summit of Croagh Patrick in Ireland

What 3 items do you always take when going onto the hills?
Flask of coffee, Tunnock’s Caramel Bar and an OS map

Which is your favourite UK summit?
I keep changing my mind… it’s now Addlebrough above Wensleydale. Quiet with great views.

What is your idea of the perfect weekend?
Pub walks and camping with my family in the Yorkshire Dales

What luxury item do you miss most on expeditions?
A hot shower and a cool beer!

What’s the best piece of advice you’ve ever had?
Under promise, over deliver

What’s the most important lesson you’ve learned outdoors?
Read the weather, read the group and always have a Plan B 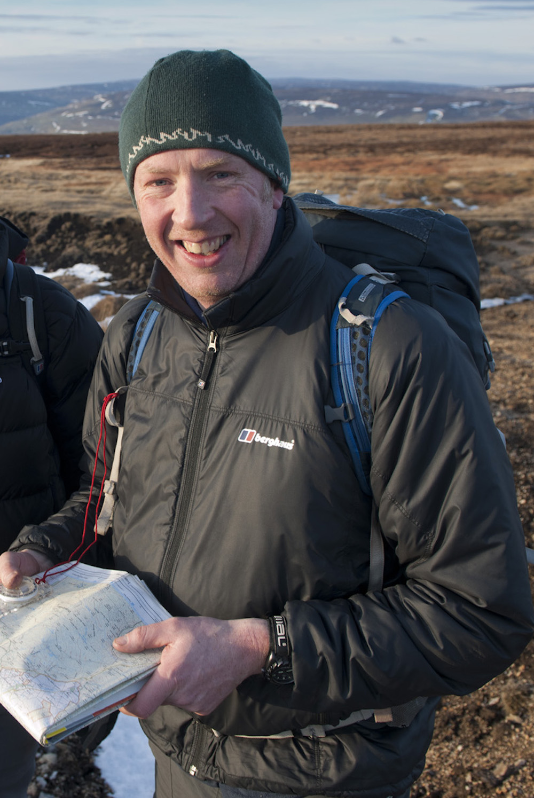 Whatever the size of your group, we can arrange a fantastic day for you. We know lots of experienced freelance Mountain Leaders, so group size is never a problem. Here are some of the Mountain Leaders we work with…

Richard Tarran MVO is a qualified Mountain Leader and Personal Development Trainer with a wealth of experience. He is a Yorkshireman and moved to Swaledale after discovering a beautiful village whilst doing the Coast to Coast walk.

His background is diverse. During 16 years in the Royal Navy he worked for The Royal Family, served as the Propulsion Officer of HMS Ark Royal and conducted aid work in Nepal and Montserrat. In 2000 he was the Deputy Leader for the Raleigh International Expedition attended by Prince William in Chile but more recently he has run expeditions to Morocco, Iceland, Costa Rica, Peru, India and Venezuela.

Graeme’s professional training is in informal and community education. His varied experience includes several years working in outdoor and adventure education, mostly with disadvantaged young people. He holds the Mountain Leader Award and is a British Orienteering Federation Level 2 coach. Since 2000 he has been a freelance trainer, lecturer, researcher and education consultant. Graeme’s pioneering work in Community Philosophy, inspired by a long-term academic interest in the philosophy of education, uses philosophical tools to support community learning, community development and social action. Increasingly, he combines walking with philosophical enquiry; the outdoors, he says, is a wonderful stimulus for thinking. Graeme has a lifelong love of outdoor activities, and competes regularly in fell running, foot and mountain bike orienteering events and mountain marathons.

Emma lives in Nottingham but grew up in the Peak District, where she still regularly walks. Emma is a Mountain Leader, Course Director and Tutor for the NNAS awards. Emma particularly enjoys exploring new areas of the UK and piecing together her own long distance routes using Youth Hostels or wild camps as a base. As a walk leader and navigation instructor Emma is known for her energy, enthusiasm and passion that she shares with her groups, inspiring and encouraging them every step of the way. Emma is a qualified mental health first aider and believes that everyone should have equal access to the outdoors, which she views as a therapeutic environment that enhances all aspects of health and well-being.

Paul lives on the edge of the Peak District National Park where he is a Volunteer Peak District Park Ranger – “it is important to look after the countryside we all love to enjoy”. He spends much of his time teaching skills and leading groups, from those doing the Duke of Edinburgh Award to leading walks in the Lake District, Peak District and Yorkshire Dales. Paul also enjoys running in the mountains and has completed the Bob Graham Round (one of the toughest challenges in the Lake District!) as well as a number of Mountain Marathons. He is a qualified Mountain Leader, Duke of Edinburgh Assessor, Athletics and Orienteering Coach.

John Proctor has been working as an outdoor pursuits instructor since 1989 and holds the Mountaineering Instructor Award (MIA). During this time he has worked with a wide and diverse client and has implemented adventure programs for education and youth groups, charities and scout troops. At the moment he enjoys providing climbing wall advice and training to Education Leeds, delivering NGB awards and running around after his twin daughters. John has extensive experience across Britain’s mountain ranges, in both winter and summer. He enjoys walking, wild camping, biking and climbing and has trekked, climbed and skied around the world. John is TeamWalking’s Technical Advisor.

Richard Duckworth hails from Essex but you’d never believe it from his Lancastrian accent! Richard lives in Littleborough on the fringes of the Pennines, but loves walking in mountainous areas such as the Lake District and beyond. He has a true love for the hills, and is always exploring new places off the beaten track. He is a qualified Mountain Leader and navigation tutor. He can often be found confusing staff in café’s by ordering “Tea for two for one”. If you’d like to know more then here’s Richard’s website.

Nicola lives in Lancaster but spends as much time as possible in her homeland of Cumbria, walking and climbing the Lake District fells. Nicola is a Mountain Leader, Rock Climbing Instructor, and a NNAS navigation tutor. She will also take any opportunity to share her knowledge of ecology, local history, as well as landscape art and literature. Some people call her ‘Little Miss Sunshine’ because she’s always smiling and is a little ball of positive energy!

Inclusivity. Our walks are enjoyable, inclusive and achievable. It is all about spending an inspiring day outdoors, with shared moments and memories, learning new skills, exploring our environment, discovering new hidden places. We have a wealth of experience dealing with groups of people with diverse experience, ability, fitness and expectations, and pride ourselves on bringing this diversity together to create a rewarding day outdoors for all.

Share our Passion. We love the outdoors, and want to share our passion with you! Mark Reid spends his working life walking the hills and mountains, teaching people navigation skills, learning about the history, heritage, geology, fauna and flora of each and every place he visits. It is this passion that inspires him to guide people out on the hills.

Natural World. Research shows that we have an innate affinity with nature and a need to be connected with it. Walking in the countryside has positive effects on our physical and mental well-being. From the clouds in the sky to the geology beneath your feet, we’ll explore the natural environment to enhance your experience.

We will plant a tree in the Yorkshire Dales on your behalf!

EXPLORE AND GET WALKING

TEAMWALKING ARE FEATURED IN:

Be the first to hear about our latest offers, new courses and exciting outdoor adventures.